TUCSON – A man accused of triggering a deadly crash overnight on the Southside was taken into custody by Tucson Police. 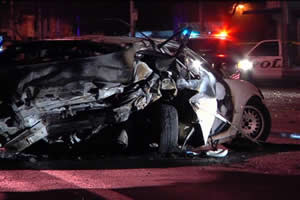 Juan M. Hernandez-Rodriguez, 28, is in Pima County Jail due to the charges as police charged him with 1 count of 2nd Degree Murder, 1 count of Aggravated Assault, 1 count of Endangerment, and 1 count of Felony Criminal Damage.

The crash occurred at around 2 a.m. near the intersection of South 6th Avenue and West Illinois Street. 1 man died and 3 were injured in the accident.

The 2000 Chevrolet Impala driven by Hernandez-Rodriguez was traveling southbound on 6th Avenue in the curb lane at a high rate of speed, according to the Detectives from the Traffic Investigations Unit. A 1994 Honda Civic turned southbound onto 6th Avenue from a private drive on the west side of 6th Avenue and the Chevy Impala rear ended the Honda Civic. The Chevy Impala continued across the northbound lanes, jumped the curb, and struck the bus bench canopy on the east side of the street, before it continued into a dirt lot and into a chain link fence. The Honda Civic stopped in the southbound lanes of 6th Avenue and immediately burst into flames.

Bystanders and officers present at the attempted and tried to help a 22-year old driver to escape from the burning vehicle, but they were unable to get the driver out of the vehicle. Personnel from the Tucson Fire Department responded and assisted in controlling the fire. The driver was pronounced dead at the accident spot. The passenger from the burning vehicle was taken to a hospital with critical injuries. The 24-year-old passenger on the Chevy Impala suffered non-life threatening injuries but was not taken to a hospital.

The driver of the Chevrolet Impala, Hernandez-Rodriguez, was under the influence of alcohol and/or drugs when the accident happened, said the detectives.

Mr. Sloan has spent the last 14+ years focusing his attention on DUI representation. He has done more than 100 felony trials and has earned numerous favorable results for his clients, including Not Guilty verdicts, dismissal of cases, and beneficial plea agreements.
Home > Blog > Drunk driver causes deadly overnight accident