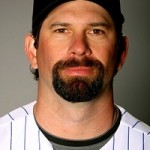 Helton was arrested at 2:30 a.m. on Feb. 6 in the Denver suburb of Thornton and charged with DUI and careless driving. Todd Helton fought tears as he asked for forgiveness at the start of spring training.

Due to a hip injury, Helton was limited to 69 games last season. He had a surgery in August to repair a torn labrum in his right hip. A career.320 hitter, Helton batted .238 with seven homers and 37 RBIs.

His arrest at the age of 39 is considered as a rare misstep that begins his 17th major league season. This could be his farewell year.

His manager told that Helton’s health will play into his decision of how long to keep playing. According to the manager, he is entering the final season of his $33.7 million, three-year contract.

“Obviously the last place I want to be on the first day of spring training is here talking about a mistake I made,” Helton said. “Last week I got behind the wheel of my truck after I had drunk. All I can do now is apologize and ask for forgiveness. I spoke to my teammates today and they were very supportive. I’m very grateful to my wife, my family, my teammates and the Colorado Rockies organization for their support. I am determined to learn from my mistakes, and I’ve gotten help.”

However, when Helton was asked about what kind of help he will receive, he didn’t elaborate. He was watched by his manager Walt Weiss and several coaches as he was questioned for nearly 10 minutes.

“I think that’s important that he had an opportunity to put some closure to the whole deal,” Weiss said. “Like I said right after it happened, Todd’s built up a lot of goodwill and respect with this club and in the community. We’ve all needed a little grace from time to time. He stepped up, he faced the music and now it’s time to move on and play baseball.”

Helton initially apologized through the Rockies to his family, the team and community before leaving for spring training. He said that he embarrassed himself.

“Overall it’s been positive. There’s nobody harder on myself than me,” he said. “It really didn’t matter. I was more disappointed with myself than anybody. Obviously it is a tough situation dealing with this.”

Helton also met with his teammates and Weiss, who assured him that it was going to be all right. He sent a message to Rockies in which he said, “The main point was it can happen to anybody. I never thought it could happen to me, and it did, and just be aware of it.”

It is observed that a five-time All-Star, three-time Gold Glove winner and the franchise leader in almost every major offensive category who won the 2000 NL batting title, Helton is ready to start afresh and put this incident behind.