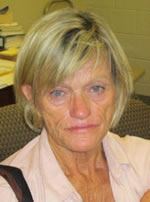 On Thursday, authorities said that an Arizona math teacher arrived drunk to a high school class and drank from the bottle again in the classroom, where she shouted at her students before one of the students reported her to the administrators.

According to a spokesman for the Pinal County Sheriff’s Office, Sergeant Pat Ramirez, 57-year-old Kathleen Jardine, who is a teacher at Poston Butte High School, faces one count of public consumption of alcohol connected with the incident that happened on Wednesday in the community about 35 miles southeast of Phoenix.

A student called the main office to inform them that Jardine was under the influence of alcohol and was shouting at students.

Police said that an on-site sheriff’s deputy responded and according to him she was “extremely intoxicated”. Police also told that after sometime, a school security officer found in her classroom a half bottle of vodka, an empty single-serving bottle of white wine and a half-empty bottle of an orange drink.The teacher accepted that she had been consuming alcohol the night before, that morning and during lunch hour in her classroom.

Jardine’s Blood Alcohol Concentration level was 0.205% according to the test, which would be considered “super extreme” if she were to get behind the wheel with that much BAC level.

She also took a taxi to go to school and said that she took a cab because she felt too drunk to get behind the wheel.

On Tuesday, her car was seized in the Phoenix suburb of Gilbert where she was charged and released for driving under the influence, according to Gilbert police spokesman Sergeant Jesse Sanger.In a statement, Pinal County Sheriff Paul Babeusaid said, “Learning math can be hard enough, I can’t imagine trying to learn it from a drunk teacher”. Babeu also told that this is not the first time Jardine was drunk in the classroom, as she was fired for such behavior while teaching in New Mexico in 2011 also.Other than the public consumption of alcohol charge, Jardine could also face a charge of disorderly conduct connected to the incident.

Officials from the Florence Unified School District, which runs the Poston Butte High School, in a statement declined to release further information related to the teacher or the incident that happened in the classroom. Jardine could not immediately be reached for comment on the incident.

Mr. Sloan has spent the last 14+ years focusing his attention on DUI representation. He has done more than 100 felony trials and has earned numerous favorable results for his clients, including Not Guilty verdicts, dismissal of cases, and beneficial plea agreements.
Home > Blog > Arizona teacher arrives drunk to class