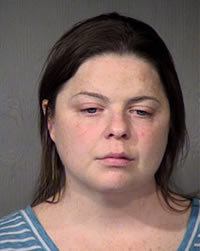 TEMPE, Ariz. – On Friday night, a woman was taken into custody for causing two chain-reaction accidents and hitting a pedestrian while driving under the influence of alcohol, said Tempe Police Department.

31-year-old Christy Kupper crashed with a vehicle in the intersection of Rural Road and Southern Avenue and that vehicle crashed into a 3rd vehicle which was nearby, according to the Police spokesman Sgt. Michael Pooley. After the accident, Kupper attempted to flee the accident spot, passing through a nearby Walmart parking lot. Pooley told that Kupper’s vehicle struck a curb and rear-ended a red Mazda passenger car, pushing it into a truck waiting to make a turn. Kupper’s vehicle spun around, hitting a 24-year-old woman who was carrying groceries to her minivan. Her 5 kids and husband were waiting in the minivan.

The injuries suffered by the woman were not serious; she has broken bones for which she was taken to a hospital.

Police took Kupper into custody and charged her with endangerment, aggravated assault, super extreme DUI, and hit and run. She was not harmed in the accident.

Kim was driving one of the vehicles involved in the accident and Kims husband, Bob House, rushed to the accident spot after receiving a call from his daughter Kendall. He said, “I was fired up when I came over here and when I find out it’s a drunk driver, I was really fired up”.

A taxi driver reportedly had to stop House due to the reason that he wanted to challenge Kupper. Tempe police were justified when they threatened to use a stun gun to calm him, said House. “I didn’t even see anybody. It was like a blur. It was like a white streak. My daughter screamed and I didn’t know why she was screaming, and then I felt like something shifted in the back of my truck,” said Kim House.

Stephenson said, “She was having a panic attack. She didn’t know what to do. … I told her that the ambulance is on the way that she’ll be okay”.

Kim House told that she and her daughter were out for dinner. “I feel lucky. I just have bumps and bruises. I’m hurting but I’ll make it,” she said.

Mr. Sloan has spent the last 14+ years focusing his attention on DUI representation. He has done more than 100 felony trials and has earned numerous favorable results for his clients, including Not Guilty verdicts, dismissal of cases, and beneficial plea agreements.
Home > Blog > 31-year-old drunk driver causes chain-reaction, hits pedestrian